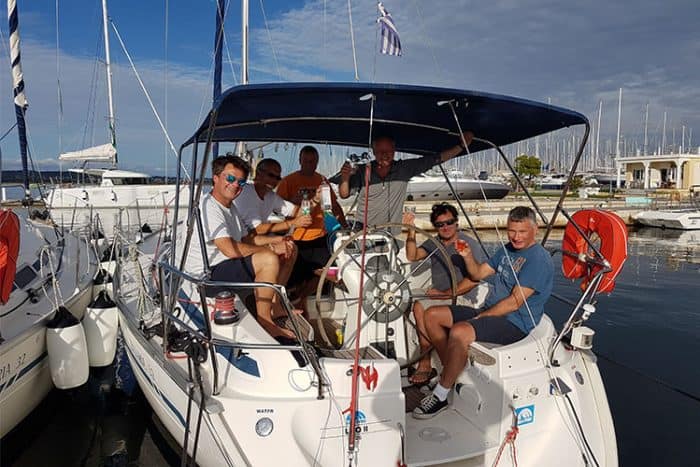 Hands up, I admit it – I’m head over heels in love. With flotilla sailing. Should have done it years ago but there you are. I caught the bug in June, on a great Sea-Trek ‘Learn to Sail’ week with my wife at Lixouri and now I’m back for more, helping crew the fleet of Bavaria yachts from Kefalonia to Preveza for their winter scrub-up.

I’m met at the airport in Argostoli, Kefalonia by the bus driver and immediately embraced by a boisterous mob of fellow mariners. Spirits are high, jokes are flowing and any fears I may have had about joining as a ‘single’ are rapidly swept aside. An hour over the mountains and we’re at Sami, gear stowed on board our 32 foot home for the week and sinking a chilled Mythos or two at the harbour-side bar. 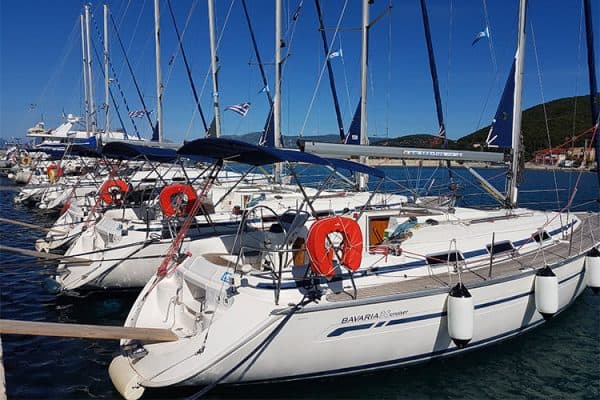 An amble around the town for a few provisions and I’m back on the boat to unpack. As I cross the saloon, a man in blue Y-fronts appears at my cabin door. He asks me what I want. I look him up and down, and can hear small gears in my head spinning, fast. I realize I am on board Leo II; my boat is called Elsa …

The whole gang eat together at a nearby taverna, appreciating James’ wisdom in ordering a banquet of shared meze nibbles. So satisfying that main courses simply aren’t needed. As for all taverna meals and drinks on this trip, we divi up the bill equally, a simple system that works.

We’re up at 08.00 on Wednesday, eager to get underway. There’s a briefing on safety and an outline of our destination on the north coast of Meganissi. I check over the engine, shut the windows and make sure the flotilla can hear us on the radio. While my crewmate slips the stern lines, I’m at the bow bringing in the anchor with its motor-driven windlass.

Now the five boats are motoring out of Sami harbour. Within twenty minutes we have the main and genoa up, heading due North with a gentle Southerly breeze behind us. A pod of dolphins breaks the surface on our starboard beam but are gone in an instant. These yachts really are brilliant. The foresail is roller-reefed while the main can be wound in and out of the mast, so in a matter of minutes we can turn full sails into handkerchiefs. The boats have the feel of a German car – solid, functional, stylish yet unfussy. 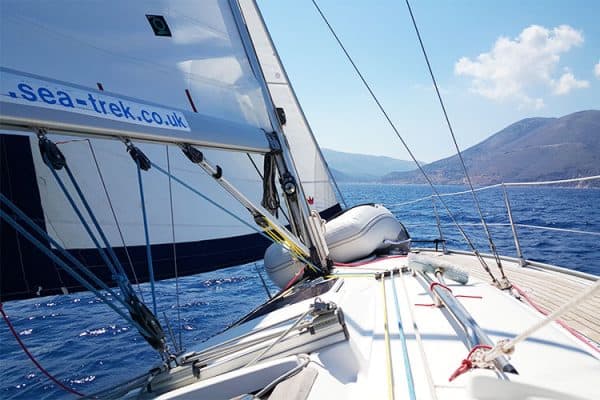 The flotilla anchors in a tiny sheltered bay, stunning Polis on the west coast of Ithaki. We have lunch on deck: juicy tomatoes the size of grapefruit, crusty bread, cheese and fresh olives.

Over the vhf radio we learn that the weather is not looking good so we pull into Sivota on the south-east side of Lefkada. With a murky outlook and the coast fast disappearing, we’re relieved at the decision. And we’ve covered 24 nautical miles.

One of the delights of sailing around these islands is the variety and friendliness of the tavernas, almost always family-owned and run. (We did a lot of quality testing that week – well someone has to. And for me, tops marks go to the oh-so-soft calamari and marinated mushrooms.) 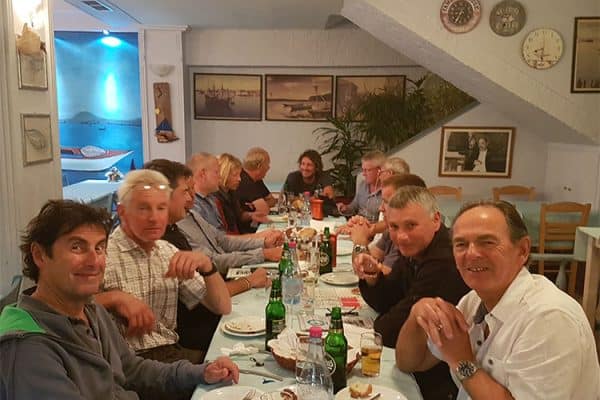 Thursday dawns clear and bright and, with the usual unhurried guidance from James on the pontoon, we are off and away once more, this time heading for Lefkas, some 20nm to the north. But the gods have other plans and we soon learn that a storm is on its way. We pass to the east of Skorpios (once Aristotle Onassis’s playground) and anchor for lunch. Even larger tomatoes, and a swim round the boat in the October sunshine.

Today we’ve had to curtail our journey so we turn and head south-south east towards Meganissi, sails in tight, Elsa close-hauled and like us, relishing every moment. This is the sailing we’ve been waiting for.

I reverse up to the pontoon at Vathi harbour and appreciate for the first time the benefits of a ‘lazy line’ which we haul up and secure to a cleat on the bow – so much less fuss than anchoring, especially in a confined space. We eat out well as usual, our crowd a diverse and interesting bunch of people. I’m first back at the boat and wonder where my crewmate is. He turns up a few minutes later with a tale.

He – let’s call him Graham (although that’s actually his real name) has just repeated my earlier mistake and boarded Leo II, alarming someone snoozing in the dark. (Later we learn that as ‘Tim’ and ‘Graham’ we have been dubbed ‘The Goodies’ and I’m happy with that.) Not covered many miles today, about 12.

Friday morning we slip our lines and set off Northwards once more. The rain is falling steadily and I’m glad I bought a decent jacket. But visibility is poor, the wind weak and we motor the 12 miles or so line astern to Lefkas. It’s a huge marina. The masts so dense they appear as a distant grey fuzz as we cruise past the stinking, smoking landfill that lies to the south. Seagulls and feral dogs compete for fetid tidbits as the rusted crane drops another load.

A successful three point turn into our tight berth and we tie up for the night. It’s a long, narrow waterway between the pontoons and I’m surprised at how far the boat’s momentum alone carries us through the manoeuvre. Tonight the heavens open and lightning illuminates my cabin for several hours.

But by dawn the rain has moved on. Today is the last leg and it brings its own challenges. The wind has risen to 20-25 knots and we motor up the Lefkas canal, through the swing bridge and out into a flatter coastal landscape, more Norfolk than Ionian. The wind is becoming quite wild and we turn into it to raise the main and the genoa.

After a brief but interesting period of self-education, I bring Elsa round and we run with the wind, boom out to one side, genoa full on the other, the few miles up to Preveza marina. Running like this is an odd sensation, the boat corkscrewing as it pitches, with me holding the course and resisting the temptation to compensate with the helm. Each time she pitches off to one side, I let her come back on her own. After half an hour, we bring in the main, the risk of a monster gybe now too great to risk.

We’re getting used to this marina business … radio instructions, reverse in, stern lines attached, lazy line picked up and tensioned. The trip is over and it feels like we’ve been away weeks, not a few days, so absorbed have we been. But I can’t recall ever having had so much fun, made so many great friends nor learned so much as in these five days. 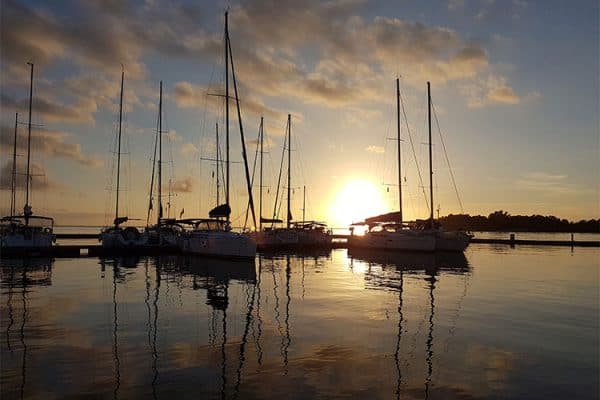 I want to come back … maybe the return in April, if the winds are southerly, would be even more exciting.

Have a look at our sailing holidays in Greece