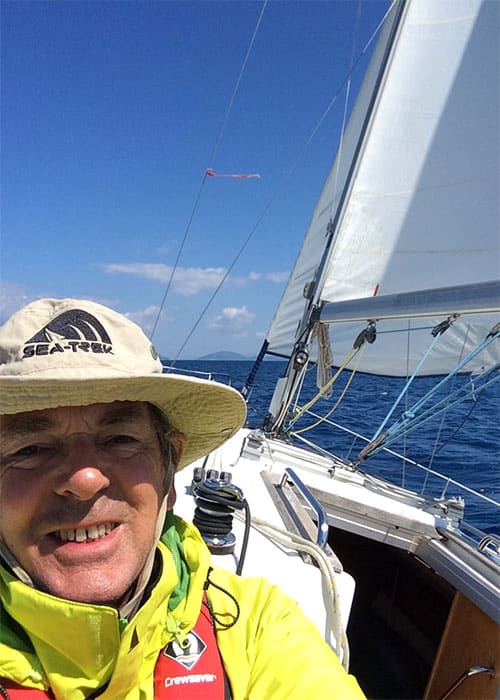 A simple request from Trek-Adventures: ‘Could you write a few words about April’s flotilla delivery from Preveza back to Lixouri? Just 5 minutes.’

Impossible. I’d need thousands of words to adequately describe the fun we had, the great friends we made and the new skills (unimaginable just a few months ago) we acquired.

But I’ll try … by Tim Neill

Corfu to Preveza – by bus

Last October, Graham and I sailed Elsa – a 32 foot Bavaria sloop – from her hectic holiday berth on Kefalonia up through the Ionian to the vast winter marina at Preveza on the Greek mainland. Now, serviced and fettled (the boat, not us) we were back for the return trip. Eighteen hardy souls landed at Corfu on the Thursday to be met by the Trek Adventures bus and whizzed by ferry and road down to Preveza marina. I think Elsa was pleased to see us again although it’s so difficult to tell. Until they are under sail, yachts are asleep and give little away.

A far better balance of sexes this trip which really added to the pleasure. A big group meal in town (can you ever have enough baby calamari?), a nightcap at the local bar and we turned in. 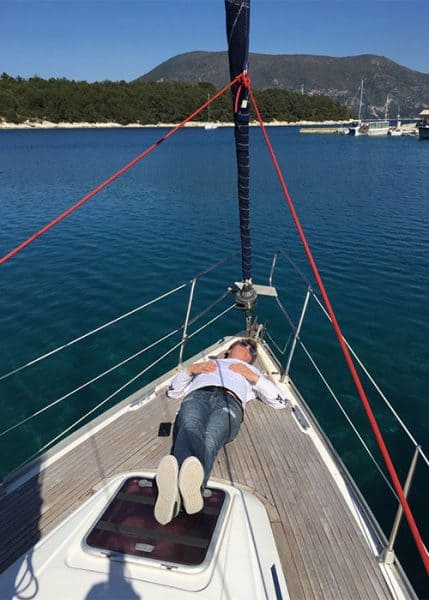 Learn how to Sail a yacht and join a Flotilla holiday

Friday’s leg was to take us due South to Vathi’s tiny harbour on Meganissi, 21 miles with a decent breeze. These boats are so stable, so tolerant of our fumbling attempts at seamanship that they make the whole sailing experience a dream. We slipped our lines, tried but failed to lasso the propeller then motored out line-astern through the shallow, well-marked channel. We rolled the bimini back to give us a chance of a tan; for the rest of the year they’ll be protecting crews from the heat! 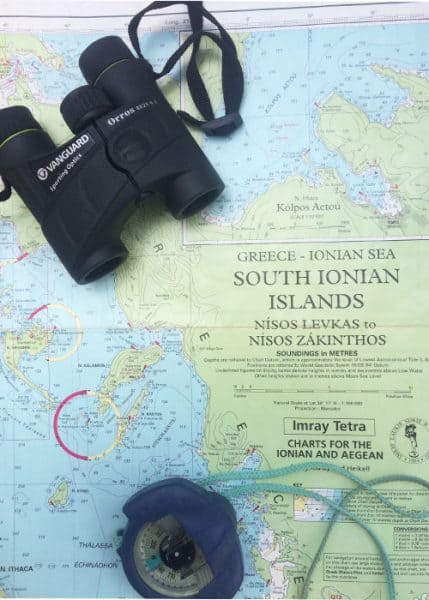 Sails down, we circled the Lefkas canal entrance while Stavros the bridge operator finished his grilled octopus sandwiches and finally opened up to let us through. Once clear, we raised sail for a clear run down to Meganissi. We thought we were doing well until we realised that we were alone. What flotilla? Odd how we usually managed to be last home. Vathi proved tricky to find (but not, apparently, for the other crews) and we enjoyed an additional traverse of the island’s North coast searching for the inlet.

Curious, that in this vast and beautiful expanse of ocean, with no living creatures around except me and possibly Graham, with not a sign of man’s existence, we had a decent 4G phone signal. A few taps on Google maps and bingo – we saw exactly where we were – not near Vathi. An hour later we motored in to the harbour having deliberately squeezed even more sailing time out of our day than any other crew. Well that was our excuse.

I love little Vathi. It’s petite, charming, peeling a bit round the edges but it feels like home. Several beers later and a terrific meal (sea bass baked in paper with potatoes, herbs and butter) brought the first day’s sailing to a mellow close.

The Ionian Islands of Greece 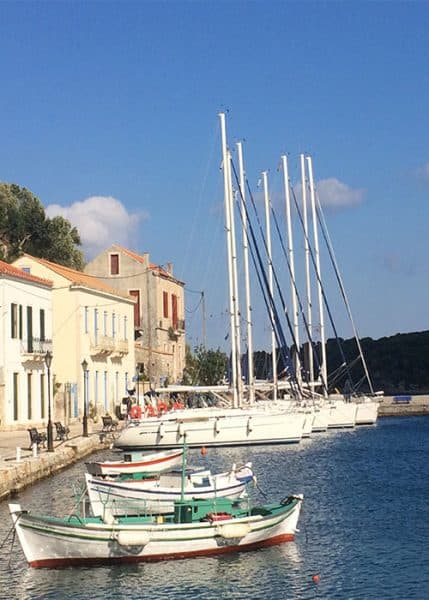 Saturday morning and the weather’s getting better, little by little it’s warming up. In a few weeks time, these deserted streets will be packed. Today’s mission – which we wisely chose to accept – was a 20 mile hop to Kioni on Ithaca (allegedly the god of speech).

We headed out of Vathi, north, then west, then south down between Meganissi and the mountains of Lefkas to our West. A shoal of canoeists attacked us, wisely backing off at the last moment and we sailed on southwards with a fair North Westerly on our starboard stern quarter.

Each time we arrive at a harbour, there is the usual pantomime of lowering the anchor and slowly reversing in, watched by two dozen critical eyes. But we seem to be improving. Unless Chris and Matt were just being kind …

Saturday night in Kioni? Beer, calamari, trying (and failing) to convert anyone else to the joys of Mastika and then bed.

See our yachts on Flotilla this summer

Ah, Sunday April 23rd will be etched in my memory forever. Deep blue skies, warm sun, NW wind of 17-20 knots and six solid hours of heeled-over, unadulterated sailing bliss, with the speedo occasionally nudging 7 knots. That evening, old salts were raving about the perfect conditions, ‘best day’s sailing in years’. The route could have been as little as 14 miles to Fiskardo but with our well-planned tacking and masterly navigation skills, we must have covered 20. Special bracing skills (and little-used leg muscles) were needed to use the loo when Elsa was leaning hard over. (Instruction to Graham: ‘For god’s sake don’t tack while I’m down there.’) 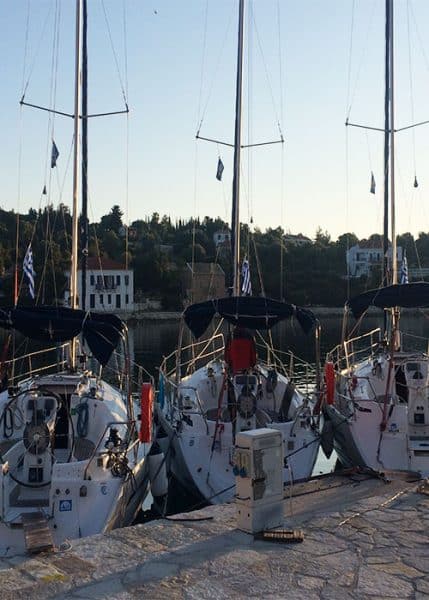 Early night tonight, as tomorrow would be by far the longest leg – 42 miles right round the west coast of Kefalonia to Lixouri. We had to arrive before dusk and wasn’t it going to be fun to race down Kefalonia in a stiff North Westerly at 6-7 knots, to end the trip at a gallop?

Have a go at Dinghy Sailing before you progress to yachts 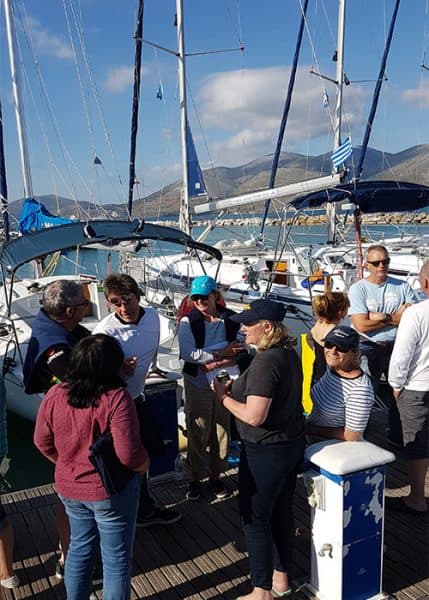 Yes, it would have been. But on that Monday morning there wasn’t a whisper of wind, not a sausage, not even a scintilla. So we motored in a stretched convoy the whole way, an oily swell on the water. After a brief (and worryingly shallow) anchorage off Rabbit island for a snooze and a brew we finally reached Lixouri and Elsa’s home, to the usual welcoming hands and ever-patient guidance. And there, waiting on the pontoon, a chill box full of beers and buckets of crisps. Another fabulous experience with some of the greatest folk I’ve ever met – roll on October.

Surely they’ll have us back?

Express an interest in the October delivery back